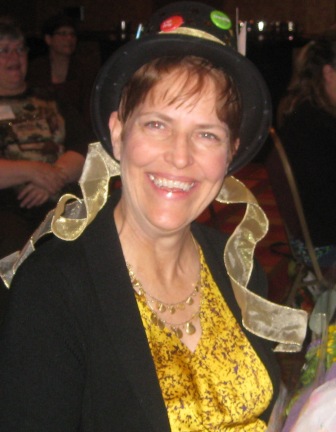 Laura Pietsch, Omaha Public Schools Library Supervisor, exemplifies the characteristics of a Mad Hatter to the max! One could say she fills both the shoes—and the hat!

Laura was born in Sioux City and has two brothers and five sisters. Her husband, Jeff, is a science teacher in the Omaha Public School District, and Laura and Jeff have two grown daughters who live in Omaha. Laura has a fantastic sense of humor and loves practical jokes. She is quite the bargain hunter and likes nothing better than attending estate sales and flea markets on the weekends. Here’s why Laura Pietsch is the Mad Hatter of 2012:

As District Library Supervisor for OPS, Laura has played an instrumental role in providing library services to over 45,000 students in 85 different locations. She has recognized that measuring our success as librarians means recognizing the success of our students in defined and measurable “Target” statements. Based on this philosophy, Laura set out to equip all the OPS librarians with terminology and ideas to incorporate assessment into the OPS Library Program. Now, when an OPS librarian begins a lesson there is a “Target” clearly defined.Additionally, OPS librarians are knowledgeable of strategies to assess the work of their students.

Laura has repeatedly been the catalyst for “outside of the box” innovative thinking at OPS. As a librarian in Bellevue, she was the inspiration for OPS adopting the use of the Big 6 research model. She, along with her colleague Kim Gangwish, began the genre-based book store arrangement of their high school library fiction sections, a model that has become commonplace in Bellevue. In OPS, Laura has tirelessly pursued funding to grow the summer library program in the district, which grew from 10 to 29 libraries just this past summer!

Laura has stepped up to the plate whenever she has been called upon to provide leadership in a variety of venues in her profession. For many years, she served on the ESU 3 Media Advisory Committee, helping to make decisions concerning media services for all of the members. She has served on the board of Nebraska Educational Media Association, and currently serves on the Nebraska School Librarians Association Board and is a current member of SCYP and NLA. Laura has presented sessions at state conferences, and is an active member of the American Association of School Librarians. Laura is a thoughtful, enthusiastic leader and team player who has tirelessly given of herself to support and sustain excellence in her profession.

The Mad Hatter Award, given by the School, Children's, and Young People’s section of NLA, recognizes an individual in the Nebraska library profession who has made an outstanding contribution to librarianship and library development for young people.