What is Media Literacy?

Watch these videos to learn about Media Literacy.

How Can We Evaluate Sources?

One way to evaluate sources is to use the SIFT Method. Click below to learn how to SIFT.

AND Use this infographic to help you figure out whether the news you encounter is credible. 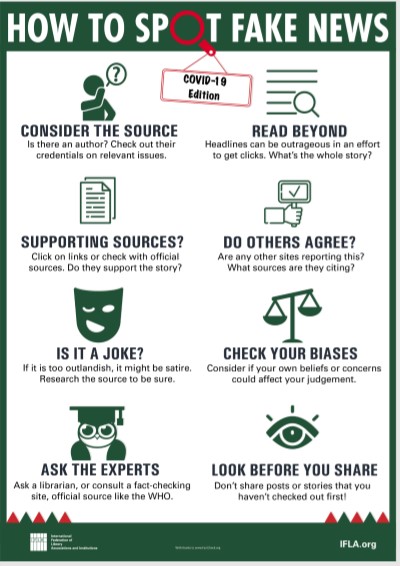 Conversation Starters about News Diets--Where Do We Get Our News?

Conversation starters about our news diets:

Begin by clicking on the link below to take a survey about your news diet. 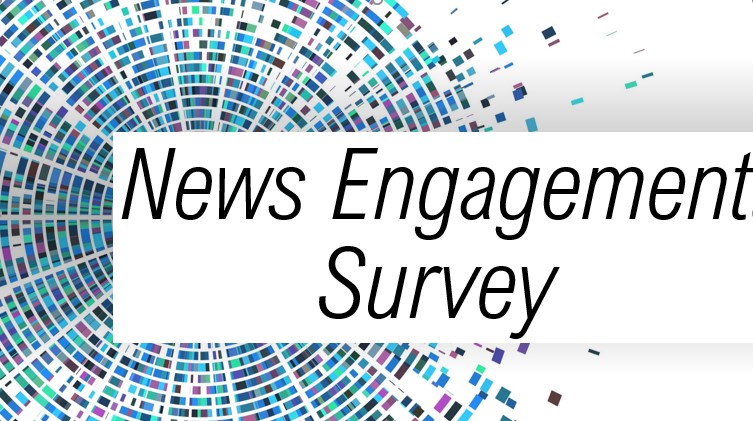 Click on the link below to see how other teens answered the same questions.

Use the source below to discover how news diets differ among age, race, place, and how they change with as technology changes.

“Many Americans Get News on YouTube, Where News Organizations and Independent Producers Thrive Side by Side” (Pew Research Center).
A revealing new study from the Pew Research Center drives home just how central YouTube has become in many Americans’ news diets. About a quarter of U.S. adults turn to the video-sharing platform for news, but only about half of the news channels on YouTube are associated with established news organizations. According to the study, independent channels — or those without a clear affiliation with an organization — post much of the remaining news content. These channels are often personality-driven and more likely to cover conspiracy theories or approach subjects with a negative tone.

How Do We Uncover Our Own Bias?

What is implicit bias?

Implicit bias is about embedded (but often invisible) ways of thinking that influence the way we interact with others. Prof. Dolly Chugh suggests that this "fog" of cloaked associations comes from sources such as media, news, conversations we hear at home, and our education.

NYT/POV's Saleem Reshamwala unscrews the lid on the unfair effects of our subconscious in this video below. 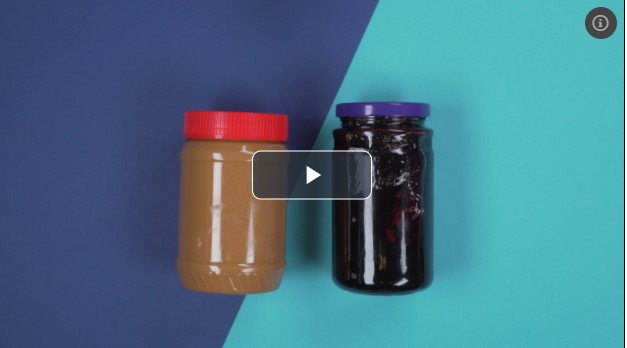 We all have implicit biases, but how do we recognize them?

OR Click on the All-Sides link to examine your biases.

Does this visual help you understand biases even better? 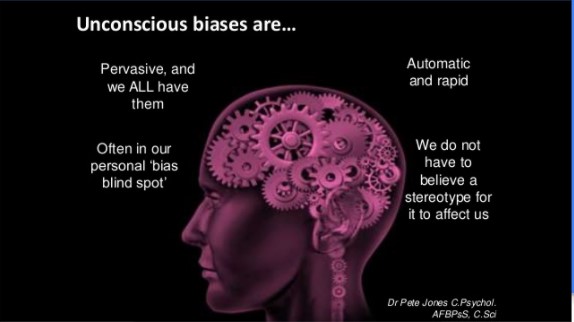 And how can we decode media bias?

Watch this video about getting unstuck.

Americans are stuck in social media news bubbles that block exposure to opposing points of view. Here you'll get concrete advice from leading media experts on how to break free and get fully informed. Narrated by Glynn Washington. 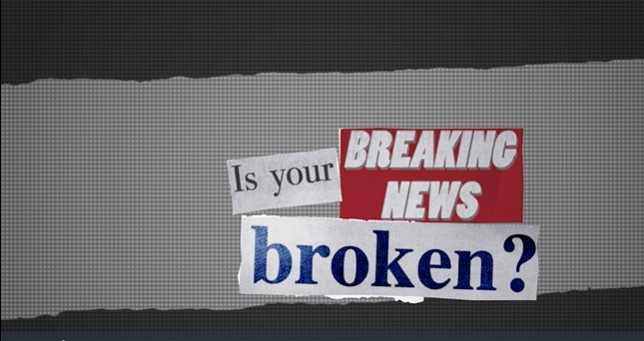 TED Playlist: How to Pop Our Filter Bubbles 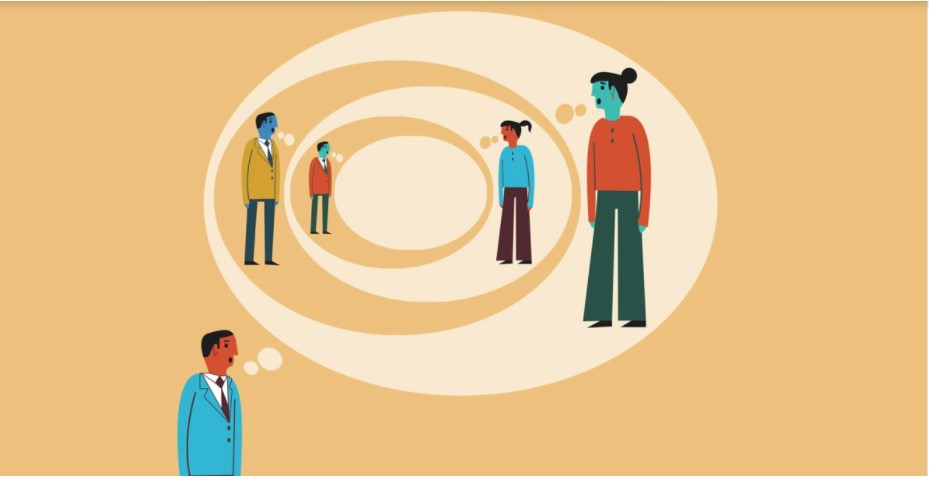 Can we trust the news? Conversation starters

Can we trust the news? Conversation starters.

It seems like any news report shared on Twitter or YouTube is inundated with "fake news" claims: comments calling out something for being "liberal propaganda" or "paid for by Russia." Most often these claims are just a way of dismissing facts or analysis that someone disagrees with.

The thing is, there are bigger, more harmful examples of bias and bad reportage. These rare but educational incidents get lost in the flurry of baseless "fake news" accusations. Case in point: Mark I. Pinsky at Poynter issued a powerful report on the shameful role Southern newspapers like the Orlando Sentinel and the Montgomery Advertiser played in normalizing and covering up injustice, racism, and violence against Black people in the decades following the Civil War, through the civil rights movement, and continuing today. Here we have an actual, high-stakes example of the news getting something wrong. It's important for students to examine cases like this -- and the political contexts surrounding them -- to build a more informed understanding of "fake news."

Read about a newspaper's shameful and racist past and consider what factors might influence how the news is covered today.

Montgomery Advertiser's apology for its coverage of lynchings. The newspaper was edited by a Confederate veteran who had a position of power and a vested interest in minimizing the damage of lynchings and blaming victims.

And then read the Poynter report below to learn more.

The Seven Standards of Quality Journalism 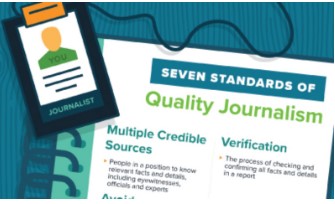 NO: Georgia Republican Rep. Marjorie Taylor Greene did not say “If English was good enough for Jesus, it’s good enough for us.” YES: This quote has been used to deride various public officials since at least 1976. YES: A version of the quote also appears in this Los Angeles Times report from 1970. NO: Fox News did not fail to cover Brian Sicknick, the U.S. Capitol Police officer who died following the Jan. 6 insurrection, lying in honor in the Rotunda. NO: The news clips in this TikTok video do not all show coverage from the same date and time. YES: Fox News was criticized for devoting significantly less time than the other networks to President Joe Biden and first lady Jill Biden paying their respects to Sicknick late in the evening on Feb. 2. YES: Fox News carried a live feed of the memorial ceremony for Sicknick on Feb. 3 for about 24 minutes — from approximately 10:30 a.m. ET until about 10:54 a.m. ET — during America’s Newsroom hosted by Bill Hemmer and Dana Perino.

Note: The links above are from the Internet Archive’s television archive. The Fox News archive reflects the network’s West Coast broadcast and shows times in the Pacific time zone.

Idea: Show students this recording of the TikTok (note that this version has been edited to protect the user's privacy and cut a profanity from the end), then ask for their reactions: How does this make you feel? What would you do if you encountered this online? If no students question the accuracy of the claim, ask: Is this strong evidence that Fox News did not carry any of the ceremonies honoring Sicknick? Is there a way to verify this claim? Then introduce students to the Internet Archive’s television archive, help them confirm the dates Sicknick was lying in honor at the Capitol (Feb. 2 and 3), and locate the actual coverage from Fox News and other networks.

★ Featured rumor resource: Watch your inbox tomorrow for a set of classroom-ready slides that walk students through the main parts of fact-checking this viral TikTok video. NO: Dominion Voting Systems machines were not used in Myanmar’s November 2020 election. YES: Voters in Myanmar vote via paper ballot. YES: The democratically elected government in Myanmar was overthrown in a coup on Feb. 1 after leaders and supporters of the military — which used to rule the country — falsely claimed that the election was fraudulent. NO: There is not only one airplane that is called Air Force One. YES: The “Air Force One” call sign is used for any airplane with the president of the United States on board. YES: There are smaller planes — like the C-32 model that President Joe Biden took to Delaware on Feb. 5 — in the fleet that the Air Force uses to transport the president. YES: The two planes most commonly referred to as “Air Force One” are based on the Boeing 747 airframe, like the one pictured at the top of this meme. YES: As Snopes reported, former President Donald Trump also used the C-32 as Air Force One.

Note: This is a narrative fragment of the QAnon conspiratorial belief system that persists in maintaining the delusion that President Biden’s inauguration was fake and that he is not actually president. NO: The Centers for Disease Control and Prevention (CDC) did not issue an order “demanding” that people wear two masks. YES: The CDC on Jan. 29 issued an order requiring passengers and operators of public transportation to wear a mask “made with two or more layers of a breathable fabric that is tightly woven” starting on Feb. 2. NO: The recommendation to ensure that cloth masks have multiple layers of fabric is not new and was made earlier in the pandemic.

Note: As FactCheck.org (linked above) points out, following the sourcing of this distorted claim about the CDC order is a case study in how false assertions often spread online. The Ron Paul Institute cites ZeroHedge, a far-right libertarian site that began as a financial blog but expanded into conspiracy theories and fringe commentary. ZeroHedge credits a website called Planet Free Will, which attributes the story to the notorious conspiracy and health supplement outlet Infowars, which is owned by conspiracy theorist and provocateur Alex Jones.

The Sift from the News Literacy Project 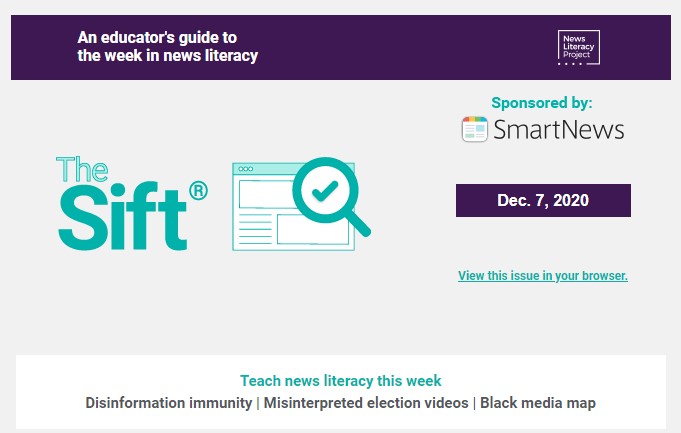 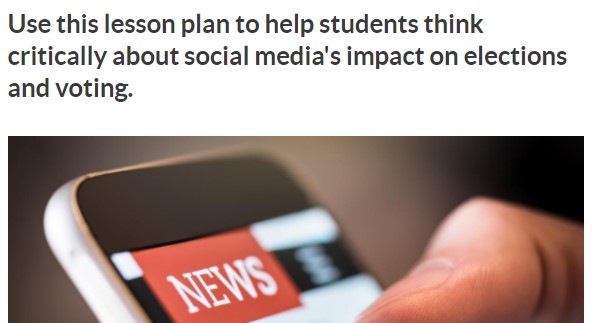 We The Voters | PBS LearningMedia

Before the 2016 Election, PBS Education partnered with We The Voters, a nonpartisan digital project featuring short films to activate voters across the country.

The Spot-The-Troll quiz is an educational tool to help the public learn to spot the markers of inauthenticity in social media accounts. Can you spot a troll?

Take the quiz to test whether you can sort fact from fiction related to COVID-19 information. The World Health Organization called the deluge of information and misinformation about the pandemic an “infodemic’ for good reason. 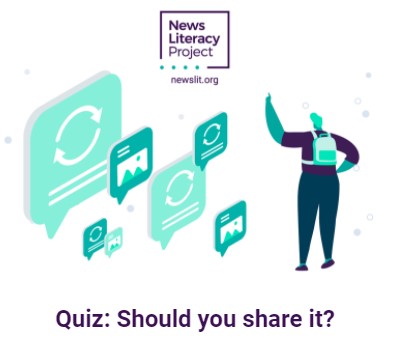 The best way for you to help reduce misinformation online is to avoid sharing it. But can you tell the difference between social media posts that are false or misleading and those that are credible? 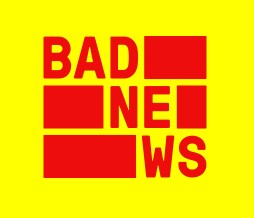 The Bad News Game puts players in the position of the people who create manipulative news stories, and as such gain insight into the various tactics and methods used by ‘real’ fake news-mongers to spread their message. 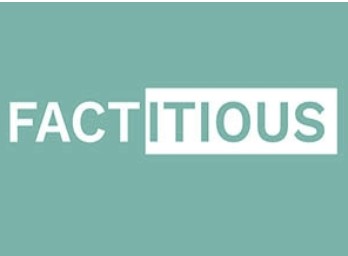 Can you spot "fake news"? Try Factitious and find out! [Works on Firefox & Chrome only.]

Create Your Own Clickbait Headlines

3 Resources about Comparing Perspectives in the News

GET TO KNOW WHAT THE OTHER SIDE THINKS A website designed to open your mind by showing you what you‘re missing in current events, historic conflicts and classic debates due to filter bubbles.

ALLSIDES allows users to see different political perspectives is the same news stories. Stories are labeled as left, center, or right of the political spectrum.

Conversation Starters: What is polarization and how does it affect the news?