There are many strategies that you may employ when looking for information in a database. When starting your search, it is important to plan out your search strategy in advance, and follow these 4 important steps to insure that you receive the results that you are looking for.

1. Define your topic (write a few sentences that explain what you are looking for)
2. Choose keywords (select keywords from your sentences)
3. Group like keywords together
4. Decide how groups of keywords are related.

Explore the differences between searching and researching.

Watch the video above to learn research strategies for expanding, limiting, and determining key words in JSTOR  to complete the annotated bibliography assignment. 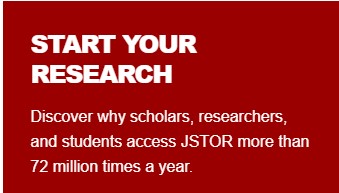 from the University of Westminster

How well do you understand plagiarism?

Plagiarism is a type of cheating in which someone adopts another person's ideas, words, design, art, music, etc., as his or her own without acknowledging the source, or, when necessary, obtaining permission from the author. For example, copying and pasting material from a web site into your own document without proper citation is considered plagiarism. Take the quiz below to see how well you understand plagiarism. 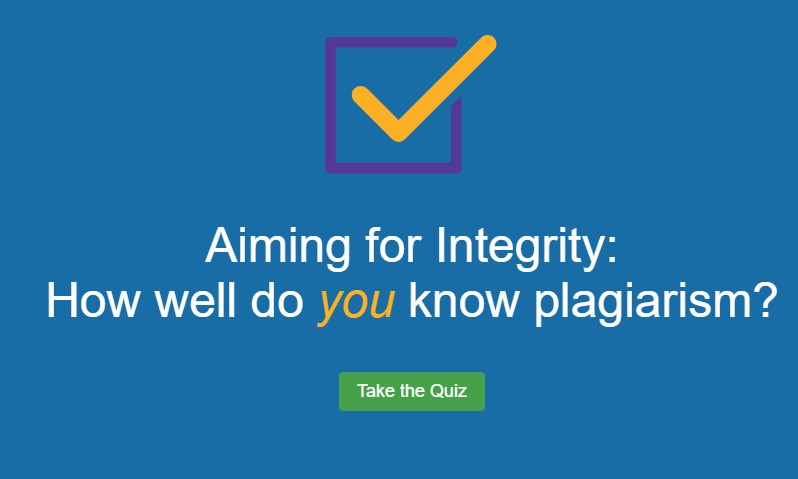 Click above to learn about the three ways to incorporate research into your writing from Purdue OWL. 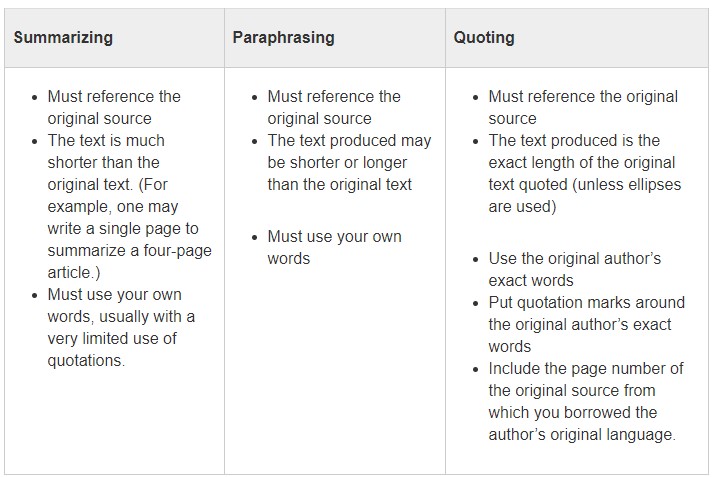 Note that a summary requires an in-text citation.

5 Steps to Writing a Summary

Some examples to compare

Note that the examples in this section use MLA style for in-text citation.

Students frequently overuse direct quotation in taking notes, and as a result they overuse quotations in the final [research] paper. Probably only about 10% of your final manuscript should appear as directly quoted matter. Therefore, you should strive to limit the amount of exact transcribing of source materials while taking notes. Lester, James D. Writing Research Papers. 2nd ed., 1976, pp. 46-47.

Students should take just a few notes in direct quotation from sources to help minimize the amount of quoted material in a research paper (Lester 46-47).

In many situations, you will not have to provide the level of detail that the original writer did. At such times, you should summarize, or remove minor details. Here’s an example:

Example: Overall, the first two quarters of 2008 have been profitable to the company. Nineteen of twenty departments report cutting costs at least twenty percent, and sales from fifteen departments have risen five percent, or about $5 million. Despite these positive developments, most department heads believe that they will not be able to maintain these levels for the remainder of the year.

Revision: The company has driven profits from January to June of 2008, but the rest of the year is not expected to be as good.

Unlike paraphrasing, the basic order of the original text is maintained. However, some words have been changed to close synonyms. When summarizing, avoid cutting too much important information.

Some examples to compare

Note that the examples in this section use MLA style for in-text citation.

Students frequently overuse direct quotation in taking notes, and as a result they overuse quotations in the final [research] paper. Probably only about 10% of your final manuscript should appear as directly quoted matter. Therefore, you should strive to limit the amount of exact transcribing of source materials while taking notes. Lester, James D. Writing Research Papers. 2nd ed., 1976, pp. 46-47.

In research papers, students often quote excessively, failing to keep quoted material down to a desirable level. Since the problem usually originates during note taking, it is essential to minimize the material recorded verbatim (Lester 46-47).

Students should take just a few notes in direct quotation from sources to help minimize the amount of quoted material in a research paper (Lester 46-47).

Students often use too many direct quotations when they take notes, resulting in too many of them in the final research paper. In fact, probably only about 10% of the final copy should consist of directly quoted material. So it is important to limit the amount of source material copied while taking notes.

A note about plagiarism: This example has been classed as plagiarism, in part, because of its failure to deploy any citation. Plagiarism is a serious offense in the academic world. However, we acknowledge that plagiarism is a difficult term to define; that its definition may be contextually sensitive; and that not all instances of plagiarism are created equal—that is, there are varying “degrees of egregiousness” for different cases of plagiarism.

All quotations must be attributed to the original author/contain an in-text citation.

Using the words of others can be tricky business. You typically only want to use a direct quotation in the following situations: if you’re using that statement as a piece of evidence for your own argument, if you’re establishing another’s position, or if another person has said something better and more clearly than you can.

The main problem with using quotations happens when writers assume that the meaning of the quotation is obvious. Writers who make this mistake believe that their job is done when they’ve chosen a quotation and inserted it into their text. Quotations need to be taken from their original context and integrated fully into their new textual surroundings. Every quotation needs to have your own words appear in the same sentence. Here are some easy to use templates* for doing this type of introduction:

You may have noticed that when the word “that” is used, the comma frequently becomes unnecessary. This is because the word “that” integrates the quotation with the main clause of your sentence (instead of creating an independent and dependent clause).

Now that you’ve successfully used the quotation in your sentence, it’s time to explain what that quotations means—either in a general sense or in the context of your argument. Here are some templates for explaining quotations:

*These templates are derived from Gerald Graff and Cathy Birkenstein's "They Say/I Say": The Moves That Matter in Academic Writing , second edition

Here are some online sources that provide examples and guidance on how to integrate quotations into your own writing:

Integrating Research into Your Writing

Use the video "Outlines" to help you think about hierarchial organization. Be sure to follow your teacher's guidelines for writing an outline.

Use the video "Drawing Relationships" to help you organize ideas.

from the University of North Carolina Writing Center